Mohawk-sporting, crotch-rubbing, musical agitator and cultural protagonist has been independently ruffling tail feathers and releasing music for over 16 years. Having collaborated with everyone from Kim Gordon to Joan Jett and Josh Homme, her songs take a ballsy approach to gender identity (she frequently used to wear a beard and a bra), and sex – think electronic rock ’n’ roll via John Waters. It’s not just her music that aggressively pushes gender norms: her sense of style is spacey but nostalgic – grills, huge shoulder pads, and a thick pink line across her eyes. Sometimes, she’ll wear a dress made of breasts, or sometimes her outfit will have more than a nod to a glamorous Mexican wrestler…

Check out her video for “I Mean Something (feat. Feist)” here:

Do you see your albums as your different children, if so, which would be your favourite?
Well, Rub is my favourite album. But I don’t see my albums as different children, I see them as development of one child. Which is the album. I’m like a proud parent, watching them grow up. I feel like, with Rub, I’ve gone back to my core elements, which I didn’t do before because I didn’t want to be called a one-trick pony.

On top of making music, you spent the time between your last album and this one doing a lot of other things.
I had six years between the two albums and I got all of my extraneous ya-ya’s out – I did an even more over-the-top version of my show, Does Herself, which turned into a movie and toured 70 festivals around the world. It had eight dancers and huge sets, which I never normally do – I like to perform like a pirate, now you see me, now you don’t, what just happened kind of thing.

Then, I did Christ Superstar. I got to use my voice, which is my secret weapon – my vocal range and my power of singing. Which is something I don’t aspire as much to on a album. When I started I didn’t want to be known as “a singer,” I wanted to cultivate a style that made people listen to the music and the lyrics.

And Rub is certainly a album.
Lyrically, we are creating new kinds of clichés, non-predictable things that you’re not used to hearing. I work on a theme. Like with “Dick In The Air,” I take the way people use words and put my own brand on it. Like, “Face down, dick up, that’s my command, Take it like a real woman not Ayn Rand.” That’s from “Face down ass up. That’s the way we like to fuck.” (from the 2 Live Crew song). I have a good chuckle with my lyrics, but I also feel like if I listened to them I’d feel empowered. 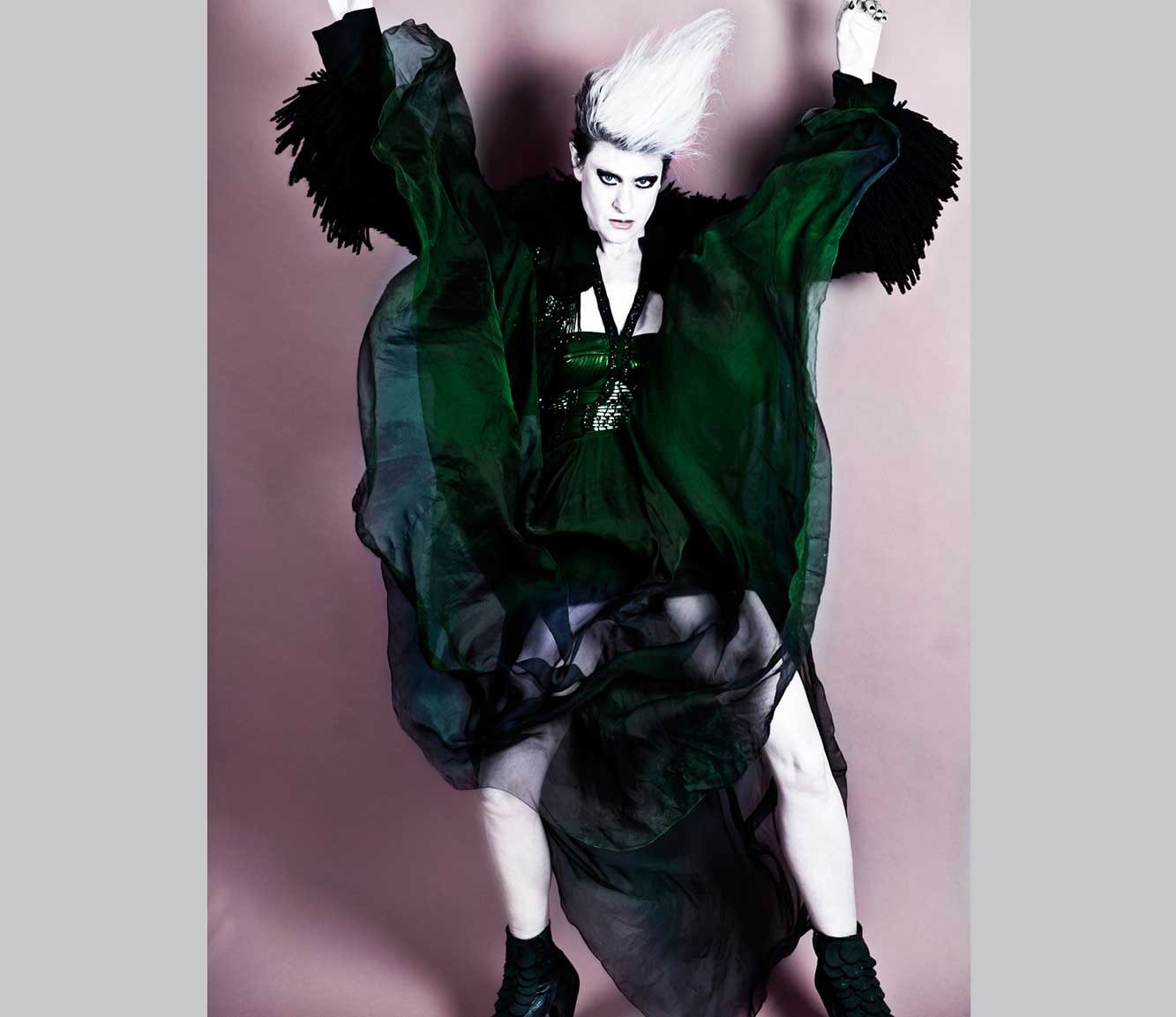 “I’m allowed to talk on American TV, but I’m not allowed to play live. They’re afraid I’m going to get naked.”

You come from a DIY place, but you’re heard in the most surprising of mainstream of places, for example, in the soundtrack to Mean Girls. Do you still feel DIY?
I still feel DIY. I have a proper agent and stuff, but it’s my own record label and publishing. No one is telling me what I can’t do. I did “Rub” the video, nobody stopped me or told me no. The only place I put that “Rub” video was on my Facebook page. I did not service it out to any other media outlets.

Do people tell you that you’ve influenced them?
Fatherfucker seems to be the one that people tell me has influenced them the most… There are ways that I slip into the mainstream. Those people whom I respect in entertainment reach out to me, I don’t expect people to help me in any way. It’s fine, it’s reality. I’m not paying a lot of money to be in those worlds, it happens seriously organically. Mainstream culture is whatever you want your reality to be. Like, when you do an internet search and it says, “You might like this.” So, you can think that your world is the only world that exists but really there are so many, but that grows exponentially in every way.

One thing that has always struck me about you, is how directly you communicate with your fans.
When I travel the US, I meet the most amazing communities, and they’re large! I played Salt Lake City and the people literally opened their arms for me. One great thing for music, for me, is that I can cut through the bullshit and go to the exact place I want to go – especially in America. In America, they have to struggle for freedom, more and more; the audiences are so appreciative that you’re doing this. They really pour over you. In Europe, they’re a bit cooler with everything. In America, the big festivals would never book me. I play every city and there will be 1000 people, and if I play festivals they are well-attended but Coachella would never book me. Or Bonnaroo. They are huge festivals and it’s ridiculous. I’m allowed to talk on American TV, but I’m not allowed to play live. They’re afraid I’m going to get naked.

And would you?
I don’t know what the thinking is there. They’re afraid they can’t control me, which gives me power and honestly, I kinda like it. It’s great to know that I still have a meaning and am still that relevant. A lot of times I’m excited about how to do it without following the method. I would never be signed or anything like that. XL took my first record, which was already on another label. “Fuck The Pain Away” was obviously the song to push and they didn’t because it was FUCK the pain away. 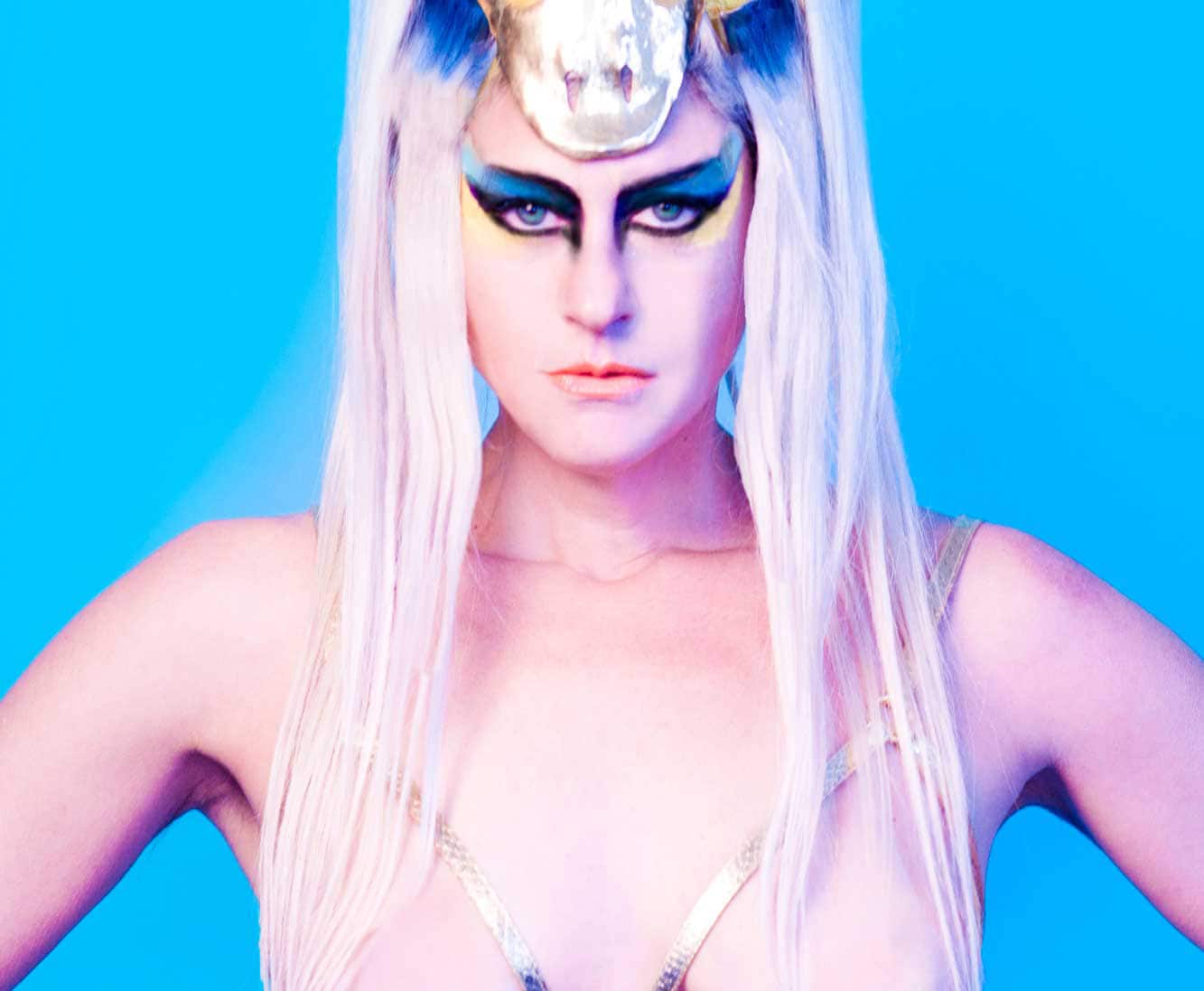 “I could do me in my underwear. I can wear all of that but I can also take it off. I’m always me.” –

As well as very much owning your sound, you’ve also always had a very particular look…
I know. In the beginning I used to wear this pink M·A·C Pigment. It was so easy to brush on a big pink line. Then somebody showed me a film called Ladies and Gentlemen, The Fabulous Stains, which I didn’t know – it was the makeup from it. It’s also kind of kabuki makeup. I would experiment backstage and just enjoy it. I went on tour with Marilyn Manson and he was like, “I do my own makeup,” and that was a big inspiration. This was all pre-Gaga. But now she’s blown that whole big shoulder thing out of the water…sometimes. I have to ask if what I am wearing is too Gaga.

Do you still feel like ‘you’ without a look on?
I feel like me without my makeup. I enjoy it. I like to put on an eyebrow. If I’m going out, I’ll do an eyebrow. I used to bleach them blonde but there’s something for me about a strong eyebrow that frames everything.

So, you’re always ‘you’.
Yeah. I could do me in my underwear. I can wear all of that but I can also take it off. I’m always me.