Each season, M·A·C Tracks invites our favourite party-starters to handpick a selection of their favourite tunes for unexpected moments of listening delight. For the holiday season, London’s coolest club kids Sink the Pink step up with over 60 tracks of festively fabulous dance floor mayhem – from En Vogue to Cher and back, via Diana Ross, Grace Jones, Basement Jaxx and The Strokes. Free your mind!

(PRO TIP: Pop the player out into a separate window, so you can keep browsing the site while M·A·C Tracks does its thing in the background!) 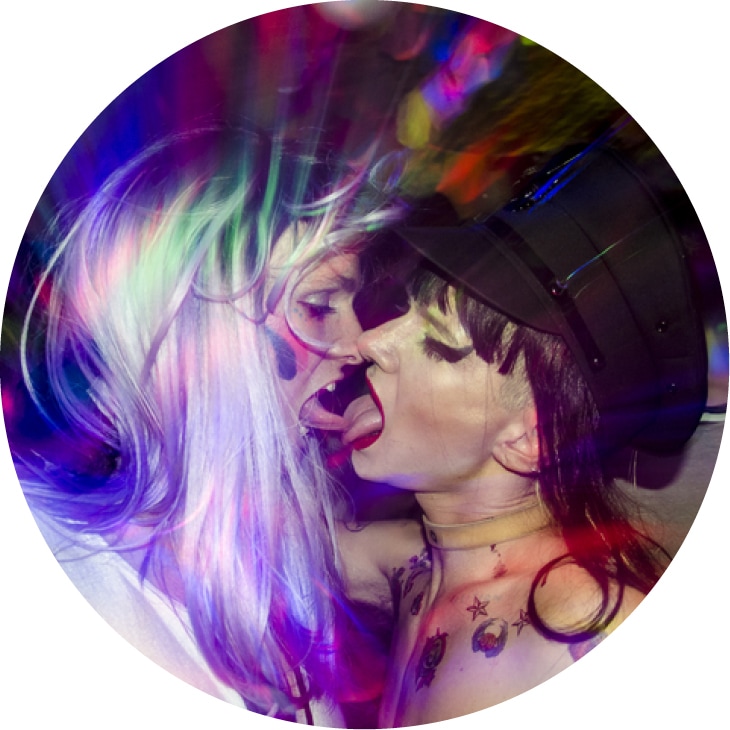 On partying with the “Tranfam,” their top three drag DOs and DON’Ts and the ultimate festive floor–fillers

What’s at the heart of a really, really great night out?
The people first and foremost. The minute you give amazing people who are all out to have a great time a free reign of fun with no limitations, it's POWERFUL stuff. They party with love and respect for one another and magic happens!

Most memorable night or appearance?
Everyone’s Sink the Pink memory is totally different, that's what makes me and Amy do this – we are making memories for people, whether that's a couple meeting or Bryan Adams catwalking with me, surrounded by drag queens…Just what we're about, makes NO sense at all!

Who or what are the Tranfam?
We are a community of off–cuts really. An army of people that never "fit" in at school or a certain scene. We have all come together now, though, and we are unbreakable – there is just so much love between us. We're a crazy commune of chaotic commodities!

Top three drag dos and don’ts?
DO:
1. Paint outside the lines.
2. Be your own motivation; don't do it for others.
3. Make sure you are laughing.
DON'T:
1. Compete – there is a place for everyone.
2. Play by ANY rules – you want to look like a pagan, convict, hippie witch in fluro? Go get down!
3. Use makeup as it should be used – lipstick makes GREAT blush!

Which eras of Clubland inspire you most?
Any era where there is a marriage between art, music, fashion and most importantly self–expression is where it's at for me. I mean, obviously Studio 54, Blitz and then BoomBox too!

What was it like to be shot by Nick Knight for a fancy fashion magazine with vintage Leigh Bowery pieces? And be featured on BBC Radio 4?
All that is crazy! We try not to think about these things. It's important our motivation for the night remains the same as it always was. These things are a fabulous extra but not our driving force!

Your ultimate party…who’s on the guest list? And who’s playing?
Leigh Bowery, Snooki, Courtney Love, Divine, Brigitte Nielsen, Rihanna and then all my London crew to really tear it up! DJing would be our resident Josh You Are, no one gets the party like he does, even if he does play too much Backstreet Boys.

SINK THE PINK’S TOP FIVE FESTIVE FLOOR–FILLERS
“Born to Hand-Jive” (Sha Na Na) – “We are actually performing this at our Winter Ball. It's MENTAL.”
“Far from Over” (Frank Stallone) – “I am OBSESSED with this song. It makes me turn into a Broadway star from the 70s.”
“King” (Years & Years) – “Olly is a big STP fan and has been coming for years. We performed this with them on their recent tour…TOTAL moment!”
“Believe” (Cher) – “This has been an STP anthem forever – we play this EVERY night and drop the music…EVERYONE knows the words.”
“Guilty” (Barbara Streisand) – “I AM BARBARA – the end!”